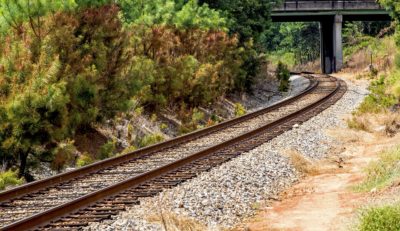 Goal: Stop railway business from chopping down millions of trees.

Millions of trees in the United Kingdom are at risk thanks to a secret operation being carried out by the Network Rail. The operation seeks to end the hassle of trees shedding their leaves and branches onto the line; thousands have already been cut down, and many more will soon follow.

While branches and leaves falling onto the line is indeed an issue, it is still no excuse to destroy so many trees for the sake of human convenience. Deforestation is already a huge problem across the globe, with entire forests being felled to make room for housing, farms, and other developments. The absence of so many trees is dangerous, as they provide oxygen and other benefits to all manner of living creatures. Worse, such work is reportedly being done with flagrant disregard for the Wildlife and Countryside Act, as several trees were cut down during nesting season despite the legal protection offered to trees and birds during this time.

We cannot allow the United Kingdom to be robbed of so many trees, and we cannot allow such an important law to continue to be violated. Sign this petition to demand that the Network Rail seek legal and eco-friendly alternatives as solutions to their problems.

Your company’s secret operation has robbed the United Kingdom of thousands of trees, all for the sake of keeping the lines clean of branches and leaves. The absence of so many trees is dangerous, as they provide oxygen for living creatures as well as food and shelter for many species of wildlife. Additionally, several of your engineers have reportedly violated the Wildlife and Countryside Act by felling trees during nesting season.

There are many more eco-friendly methods of keeping the lines clean; pruning, for example, involves only cutting off branches and leaves while leaving the rest of the tree intact. Your operation is simply excessive and dangerous, and you must put a stop to it. We need trees to survive, and clean rail lines are not worth such damage to the ecosystem. Please seek safer alternatives to keeping the lines clear of branches and leaves and end this operation immediately.