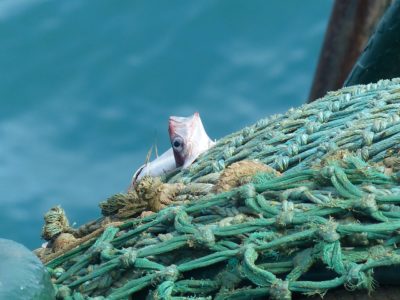 New research shows that millions of tons of fish have been caught in deep-water trawl nets in the past 50 years and not been reported, even though the United Nations Food and Agriculture Organization (UN FAO) keeps tabs on the practice because of potential damage to the environment and to future populations of fish. Bottom trawling is the practice of dragging nets along the ocean floor, and it often pulls a variety of species out of the sea that are not the desired catch, as well as very young fish, threatening the replenishment of the population and the balance of the ecosystem.

According to estimates, the true number of fish removed from the ocean this way is nearly double the reported amount. Of that unreported catch, about half may have been sold or eaten while the other half were simply thrown away. However, the long-term implications of the fact that such a vast number of fish have gone unaccounted for are even more concerning. Inaccurate data about population counts could prevent the entire fishing industry from remaining sustainable.

In certain areas and at certain depths, deep-sea trawling is already banned. But there are many more areas where the practice continues, where fish populations are extremely sensitive. Species such as Chilean sea bass and orange roughy live long lives and grow at a slower rate, meaning that they do not reproduce until they are much older and therefore have a much more difficult time recovering from overfishing. Trawling also devastates the entire habitat, ripping up anything in its path, including corals and anemones. As researcher Maria Palomares says, “The whole bottom becomes a wasteland.” Additionally, deep-sea trawling contributes an extremely small amount of overall fishing catches, so banning it would not be a detriment to the fishing industry as a whole. It is clear that the ecological costs of bottom trawling greatly outweigh its benefits. Sign below to protect our oceans and demand that deep-sea trawling be internationally banned.

Deep-sea trawling is a dangerous practice that threatens ocean habitats and fish populations, and, it follows, the fishing industry as a whole. Reports from the University of British Columbia show that the total amount of sea life dragged from the ocean by deep-ocean trawls, including bycatch, is nearly double the number of fish reported to the UN.

The ecological drawbacks of this practice hugely outweigh any benefits. Entire habitats can be destroyed by bottom trawling, and fish populations suffer and may not be able to recover if things go on as they are, which could make fish stock unsustainable. Also, estimates indicate that even including all of the unreported catch, deep-sea bottom trawling has contributed less than 0.5 percent of the fish caught in the last 65 years. As Frédéric Le Manach, the scientific director at BLOOM, states, “It’s nothing in terms of volume or in terms of value. So it would be very easy to stop [deep-sea] bottom trawling.” I urge you to protect our oceans and institute an international ban on deep-sea bottom trawling.