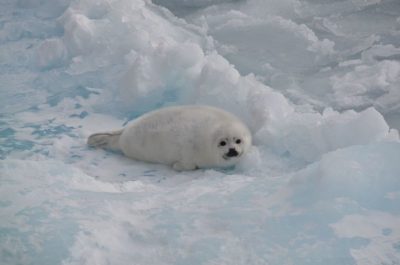 Goal: Stop subsidizing the annual seal hunt that slaughters thousands of seal pups and their mothers.

Canada’s Department of Fisheries and Oceans (DFO) has estimated that over 43,000 harp seal pups and their mothers have been brutally shot or clubbed to death as part of the nation’s annual commercial seal hunt in Newfoundland. Despite the international outcry against this barbaric practice, including India’s recent move to ban the import of seal products, the hunt will continue for several more weeks, during which time another 40,000 seal pups may die. With so many nations now banning seal products, it is far past time that Canada finally put an end to this cruel and outdated custom.

Harp seals have traditionally been hunted for their skins, which are turned into coats or other leather goods. However, increasingly these pelts are being disposed of in vast numbers, thanks to the fact that international demand for seal products has plummeted due to laws banning their import and shifts in public opinion. Despite this fact, the Canadian government continues to subsidize these hunts, which allows this massacre to continue.

This grisly practice that results in baby seals less than two months old being impaled on picks, clubbed or shot in the face must be stopped once and for all. Sign the petition below to demand that the Canadian government stop allowing this atrocity to occur.

The annual seal hunt in Newfoundland’s far northern reaches is an abominable practice that results in thousands of defenseless baby seals being battered with clubs or shot. It is a shameful practice that has rightfully been condemned by other nations around the world, including the United States, the European Union and India. The slaughter of weeks-old pups and their mothers is inhumane, and is grotesquely wasteful considering that so many of these pelts are rotting away before buyers can be found.

There is no need to continue sponsoring or subsidizing these cruel and barbaric hunts. We, the undersigned, demand that you stop this unethical practice by helping to ensure that this year’s grisly hunt is the last time these innocent animals are massacred.