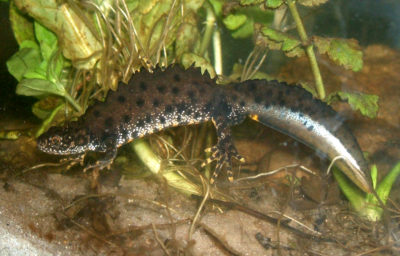 England’s great crested newt population is nearly extinct. Last spring, the species’ natural habitat was bereft of eggs when previously the females would lay close to 200 every mating season. The only crested newt discovered that year was a single dead male. Currently, there have been no reports on crested newt sightings this spring, giving an even greater sense of dread for the species.

These creatures used to be one of the most widely distributed species throughout Britain, and could easily be found in most central European countries as well. Unfortunately, last spring’s discovery could mean the end of this species overall; not only are many of these newts eaten by predators such as badgers, rats, and birds, they have also lost much of their habitat to the agriculture industry. The species has been on the endangered list for some time now, but the sudden absence has caused a great alarm among animal conservationists.

We cannot let these newts disappear. Not only is it horrifying for a species to all but disappear from its natural habitat, but the crested newt is invaluable to the ecosystem due to their diet of invertebrates keeping certain bug populations under control. Sign this petition to demand stronger protection and conservation efforts for these creatures.

Last spring, scientists made the harrowing discovery of no new eggs laid among the great crescent newt; the only newt discovered was a single dead male, and there have been no reports of eggs laid this spring, either. The great crested newt was once one of the most plentiful species in England despite being on the endangered list, but now it may disappear forever due to predators and habitat loss.

You must aid in the conservation of what remains of these newts. They need to be protected and given a chance to rebuild their population, safe from the badgers or birds that may eat them and in a habitat where they can thrive without the danger of losing their safety to the agriculture industry. This species is vital to the ecosystem, and must be protected. Please instill stronger protection and conservation laws.