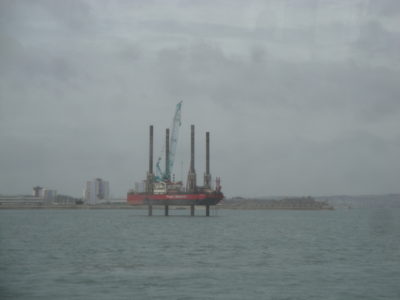 Goal: End underwater noise pollution that is endangering the survival of marine life.

Marine life, including whales, fish, and invertebrates, are constantly inundated with humanmade noise that interferes in their ability to thrive, and the NOAA’s National Marine Fisheries Services (NMFS) has done nothing but monitor the situation. Scientists are well aware of the problems associated with underwater noise pollution, but no concrete progress has been made regarding a firm regulatory stance by the NMFS. Rather than passively monitoring the effects on marine life, the NMFS should take action to limit humanmade underwater noise pollution and protect these species.

Underwater noise pollution, or sound propagated through the ocean waters, is largely humanmade and includes noise from ship traffic, military sonar, and exploratory drilling. This sound can travel miles across the ocean and impact marine life from many directions at once. Many types of marine life use sound to interpret their environment and to communicate, which is now threatened by constant noise underwater. Whales, for instance, use sound to find mates, let others know where food is located, and to escape predators. Other types of marine mammals, fish, and even invertebrates, rely on the ability to hear and transmit sounds to other animals. Meanwhile, noise pollution from offshore drilling and ship traffic is increasing every year, impacting the ability of these animals to find food and to reproduce. Offshore oil exploration for instance involves a series of what sounds like mini explosions every few seconds for months at a time until a survey area is completed. Ship traffic is said to be doubling every ten years. The sound levels impacting marine life will only worsen with time.

There are technologies available to dampen the sound from ships and exploratory drilling equipment but it is not being implemented. Small areas have experimented successfully with implementing “quiet zones” in sensitive habitat areas to protect wildlife, but it is not widely known. Instead of affecting real change to protect these species, the NMFS only monitors noise levels. Sign the petition to encourage the NMFS to take action to regulate these noise sources and protect the marine life dependent on a quiet ocean for survival.

Marine life is under siege by anthropogenic underwater noise pollution. Underwater noise pollution is a well-known issue to scientists and has many solutions that could be implemented. Yet the NMFS has not taken a definitive regulatory stance to protect marine life who rely on sound to survive. While it is important to study this phenomenon, it is equally important, if not more so, to take action.

Many species of marine life rely on sound to communicate with their groups in order to find food and mates and warn others of predators. It is crucial for their survival that they be able to hear the sounds from others, and with ship traffic and oil exploration increasing every year, this is made nearly impossible.  “Quiet zones” have been successfully implemented in sensitive marine habitats. Technological advances exist to dampen sound from oil exploration equipment and ship engines. These tools are at our disposal but are not being used to protect marine life.

With underwater noise pollution worsening every year and a myriad of solutions available, there is reason to take immediate action. The NMFS has the ability and the power to regulate these anthropogenic noise sources to protect marine life. Please, take action to implement acoustical protections for these sensitive animals.