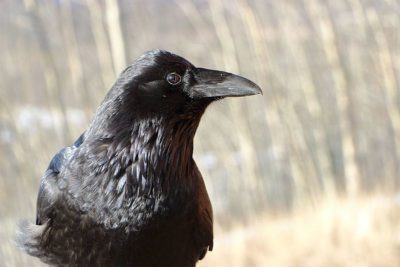 Hundreds of ravens in the highlands of Scotland may soon be targeted by hunters thanks to a new five-year license permitting their killing as part of an experimental cull led by Scottish Natural Heritage. A number of environmental groups are decrying this decision, saying that it is unnecessary and based on ill-informed persecution against these birds. Throughout history, ravens have been cast as villainous creatures. We now know they are remarkably intelligent birds that play an important role in the natural ecosystem. Therefore, they must be protected.

Part of the reason for the planned cull is the fact that a number of bird species in Scotland are in decline. One species in particular, the white-tailed sea eagle, is believed to have vanished entirely. Ravens are blamed for stealing these birds’ eggs and preying on their nestlings. While this may be true, it is equally true that human-caused environmental pressures like habitat loss and hunting are also significant factors contributing to the dwindling bird population.

Ravens should not be held solely accountable for larger environmental issues in Scotland. Sign this petition to urge the Scottish Natural Heritage to revoke this unnecessary license to kill these magnificent and intelligent birds.

I am writing to demand that you and the other members of Scottish Natural Heritage board revoke all recently-issued licenses given to hunters in Perthshire to cull ravens over the next five years. While ravens are opportunistic hunters and scavengers, they are not solely responsible for the drop in bird population in the Scottish highlands.

Research suggests that birds like the white-tailed sea eagle, now feared to be extinct in the region, face more immediate threats from human-related causes, including habitat loss, hunting, and the presence of introduced predators like feral cats. I urge you to listen to scientists and conservationists who have expressed their concerns regarding this cull, and ask that you revoke all licenses to slaughter these intelligent birds immediately.