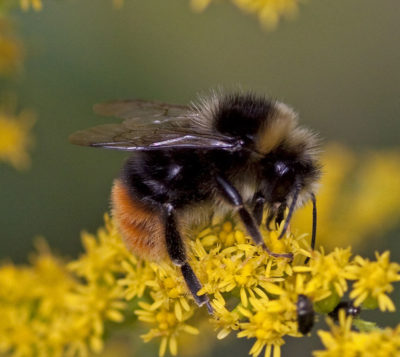 Goal: End siege against endangered pollinators and protect them from extinction.

Rare animals that perform a crucial function in agriculture and the wild are currently fighting to survive against an increasing number of human-made obstacles. Pollinators need to be protected, and not just honeybees.  Honeybees typically receive the most attention but only represent approximately one-third of crop pollination and an even smaller percentage of wild pollination. Meanwhile, many other pollinators are in danger, including bumblebees, butterflies, flies, and many other types of bees. We need to implement broad changes in agriculture and development in order to protect these species.

The decline of wild pollinators over the last several decades has gone largely unhindered. Several factors contribute to the loss of these important members of our ecosystems and are linked to loss of pollinators’ food sources and habitats, including widespread pesticide use, land cover changes, monoculture farming, climate change, and increased competition from commercial beekeeping. Land cover changes for farming or other uses destroy the habitats and diverse food sources for pollinators, Monoculture farming, although efficient for food production, has a secondary effect of providing food for pollinators in the immediate area only for a small window of the year. Climate change has impacted seasonal cycles and when plants bloom, endangering the pollinators’ food sources. Climate change and monoculture farming impacts are then exacerbated by the competition with commercial beekeeping for the limited food supply.

Efforts to save these species include pollinator gardens, but these are often small, isolated, and insufficient to make significant changes. Single-focus conservation such as this on one species of pollinator is not enough to maintain all species. A wide array of conservation efforts is necessary, including large and connected pollinator gardens, pesticide bans, movement away from monoculture farming, and consideration of these species during land cover changes. Species such as the bumblebee are already endangered and their challenges will only worsen.

Honeybees are a main focus when it comes to saving pollinators, and rightly so; however, honeybees represent only a small portion of both crop and wild pollination. Other pollinators need protection as well and face a multitude of challenges. Sign the petition to encourage regulators to assign resources to broad, multi-faceted conservation of all pollinators.

Pollinators are under siege from human-made obstacles, including land cover changes, monoculture farming, and commercial beekeeping, and it is not limited to honeybees. Actions by humans constantly threaten the habitats and food sources of all types of pollinators, including bees, butterflies, and flies. An estimated 75% of food crops depend on pollination, half of which is provided by wild pollinators. Honeybees are often the focus of conservation efforts, but only provide approximately one-third of our crop pollination. The remainder still require our attention.

Wild pollinators are very important to our ecosystems and to farming. Many crops and wild plants cannot proliferate without them. Although the conservation focus on honeybees is just and admirable, many other pollinators exist and require multi-faceted conservation efforts to combat the many different factors impacting food sources and habitats. Conservation attempts thus far have been insufficient to reverse the growing number of endangered pollinators.

Please mobilize the U.S. Department of Agriculture to implement broad, multi-faceted conservation efforts to protect all pollinators and the important work they do. Industry and farming has yet to feel the impacts of declining pollinator populations and will not make changes on their own. Don’t wait until it is too late.