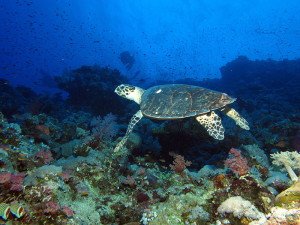 Goal: Ban plastic bags that are polluting the oceans and harming marine life.

April 22nd marked the 48th Earth Day, and this year’s festivities included a major call to action to end plastic pollution. Degraded plastic releases pollutants that threaten wildlife worldwide, especially in our oceans. Even non-degraded plastic bags and other material can create a dangerous hazard for animals that may ingest or become trapped in the material. Current estimates put the number of oceanic animals killed per year due to plastic pollution at around 100,000.

While increased education and awareness about this issue and about recycling can fuel future action, now our best tools for change rest within the legal framework. Currently, many countries and regions ban single-use plastic bags that cannot be reused. Americans go through 100 billion of these oil-based products per year and use each for an average of only twelve minutes. Those few minutes can create a lifetime of long-term damage. Consider if just one major US state could put a dent in this danger and set an example for the rest of the country.

Currently, New York leadership is considering just such a step. Sign this petition and encourage one of the leading US states to ban the distribution of single-use plastic bags for the future of our water sources and the living beings who rely on these sources.

“A devastating toll on our streets, our water, and our natural resources…”

These are the powerful and true words Governor Cuomo used to highlight the tremendous impact plastic pollution has on our environment. The New York State Plastic Bags Task Force provided concrete form to Governor Cuomo’s grave assertions. Every lake, stream, and ocean provides irrefutable anecdotal evidence of this danger, from turtles with plastic traces found in their carcasses to fish trapped in discarded trash. The negative cycle of plastic pollution will inevitably pose a public health danger as well.

We urge you to join cities and states around the world by approving the bill that would ban deadly single-use plastic bags. Honor your governor’s vow to protect our environment and all of its inhabitants.