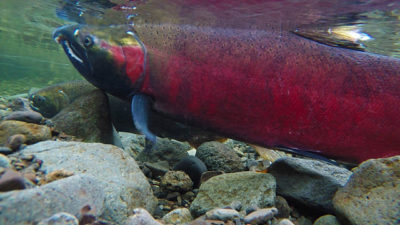 Unknown pollutants from urban runoff are killing Coho salmon in the Puget Sound. Coho salmon have already been identified as a species of concern under the U.S. Endangered Species Act and will continue to experience population decline as long as this toxic runoff is allowed to impact Coho salmon habitats.

Researchers at Washington State University conducted a study of Coho and chum salmon due to recent concerns with a decline in the Coho salmon population. These scientists believe that the premature mortality of younger adult salmon prior to spawning, or urban spawner mortality syndrome, has been occurring for decades due to polluted urban runoff near salmon habitats. The study conducted on both Coho and chum salmon, however, revealed that chum salmon are not as susceptible to the impacts of this toxic urban runoff. Although these species are similar, the Coho salmon is very sensitive to one or more pollutants in the runoff, resulting in a high mortality rate. The specific contaminant has not yet been identified, only correlated to high-traffic areas around the Puget Sound. Since most pollutants associated with highway runoff are metals, and scientists have determined that metals alone are not causing this population decline, it is assumed that the pollutant causing these impacts is not currently regulated with a water quality standard or limit.

Without identification of the specific pollutant causing Coho salmon mortality or how the chum salmon can survive in it, all runoff should be targeted for reduction and/or treatment prior to release into the Puget Sound. In addition, further research should be funded to determine the exact pollutant that has been causing the decline in the Coho salmon populations and what, if anything can be done to help the Coho salmon thrive as the chum salmon do.

The storm water runoff from high-traffic areas around the Puget Sound has been killing Coho salmon for decades and scientists cannot identify what contaminant is causing the population decline. While research continues, this species of concern will continue to die off unless this contaminated runoff is stopped from entering their habitats.

The population decline of Coho salmon has been linked to the runoff from high-traffic areas around the Puget Sound. With the Washington State Office of Financial Management, Forecasting Division estimating significant population growth in the area over the next two decades, this problem will likely worsen. The contaminant in this runoff has yet to be identified and cannot be controlled through water quality standards. Something must be done to prevent this runoff from poisoning the Coho salmon habitats.

Coho salmon are a food source and an integral part of the Puget Sound ecosystem. Don’t allow urban sprawl to completely kill off this species. Put policies in place to stop or treat this runoff while this important research continues.