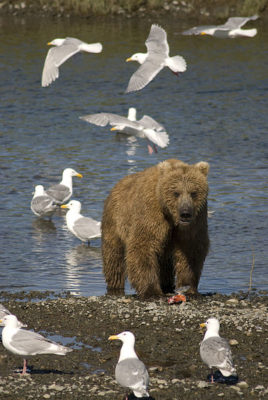 Most recently on his laundry list of environmental blunders, President Trump has now overturned a crucial protection rule that was preserving Alaskan wildlife. The Refuge Rule was installed in the state of Alaska to protect animals such as bears and wolves from hunters who sought to control the populations in local areas. Initially the rule was created as a way to provide ecological balance between the caribou and the predators (such as bears and wolves) because of inhumane poaching techniques used by hunters.

The leader of the Humane Society called this move “an outrage for any animal lover in America” and his point is backed up by animal rights activists across the country. The only way to stop this act is to have the U.S. Fish and Wildlife department reinstate the Refuge Rule. Stand with us in demanding U.S. Fish and Wildlife protect endangered species and reinstate the crucial Refuge Rule.

President Donald J. Trump seems to have a special hatred for the environment and all those who inhabit the land. His policies seem to directly support the belief that he does not care about what happens to any life aside from his. The Refuge Rule overturn is a huge loss for Alaska to take as the state fights to protect its evolving wildlife.

Laws like this may seem small because they are based on one state, but if we allow Alaska to start killing its wildlife, what is to stop other states from following suit? We need to stand up for our endangered wildlife immediately. We demand you do something about this outrageous ban.