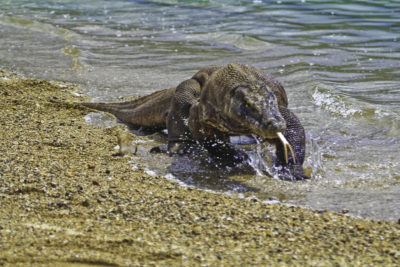 Indonesia’s Komodo National Park is at the tipping point of destruction. Its natural beauty is being ravaged and its wildlife endangered by excessive tourist fishing, which while illegal is still happening every day. Through both line fishing from boats and net fishing from dive sites, aquatic wildlife is being stolen from the seas or becoming entangled and left to die in nets or lines.

Komodo National Park is a UNESCO World Heritage Site, many of which are in danger due to the thoughtless and selfish actions of humans. Fishing is illegal in such places, yet people continue to do so anyway, robbing the oceans of valuable aquatic wildlife and doing damage to the ocean’s fragile ecosystem. Komodo Park is losing much of its wildlife, most notably sharks who are fished and killed for their fins. The park’s namesake, the Komodo dragon, is also listed as vulnerable; this status could change for the worse at any time.

We must protect this beautiful heritage site from thoughtless, law-violating fishermen, not only to preserve a national treasure, but for the sake of the ocean’s delicate ecosystem. Sign this petition to demand tightened laws against fishing at Komodo Park.

Komodo National Park’s natural beauty is being ravaged by overfishing of various vulnerable species. Despite fishing being illegal at this World Heritage site, tourists continue to bring their lines and nets, robbing the sea of at least a thousand creatures every day, especially sharks who are killed for their fins and the park’s namesake, the Komodo dragon, which is listed as vulnerable.

This park is at the tipping point of destruction. Thoughtless fishermen continue to violate the no-fishing laws, threatening the ocean’s delicate ecosystem in addition to the park itself. You must enforce stricter laws against fishing and stronger protection for the park’s wildlife before this beautiful site disappears forever. We cannot let the actions of selfish humans rob us of Komodo National Park’s natural beauty.