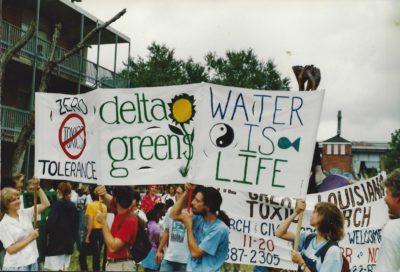 Goal: Do not pass a broadly defined bill that could make the act of planning to participate in a pipeline protest illegal.

Louisiana and two other states—Minnesota and Pennsylvania—are attempting to crack down on pipeline protests by making the very act of planning to participate in one illegal. While it is already against the law to trespass on property owned by energy companies responsible for laying down pipelines, a newly proposed bill would go one step further and allow would-be protesters to face severe penalties for merely ‘conspiring’ to protest in the first place. In a state with a long history of battles against major oil companies, this law could silence demonstrators once and for all.

Inspired in part by the success of protesters in North Dakota in impeding progress on the Dakota Access Pipeline, Louisiana activists have staged their own protests against the proposed Bayou Bridge Pipeline in that state, which could endanger the drinking water supply for hundreds of thousands of residents. These actions have resulted in a backlash in the fossil fuel industry and the political groups they are allied with, resulting in the creation of this unfair bill that could label any group of two or more individuals planning to protest at a pipeline site as ‘conspiring’ to break the law. Even if they never disrupt operations or vandalize property, they could still face serious penalties, including arrest and time spent in jail.

Louisiana must not approve such a harsh law that could so severely restrict its citizens’ First Amendment rights. Tell the Louisiana Speaker of the House that this fossil fuel industry-backed bill must be rejected.

We are writing to urge you to reject a recently introduced bill that proposes to penalize people guilty of ‘conspiring’ to enter property owned by energy companies to protest pipeline construction. Trespassing and vandalization are already illegal in the state of Louisiana, making this new legislation designed to protect these companies’ assets completely unnecessary.

Protesters have a constitutionally sanctioned right to express their concerns regarding pipeline construction and other potentially environmentally damaging actions. That is why we, the undersigned, demand that you do not allow them to be fined or arrested for simply planning demonstrations without causing any actual harm to property or infrastructure.