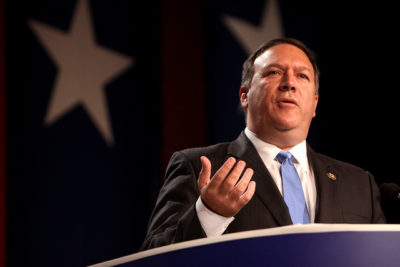 Goal: Do not appoint a nominee who fights environmental causes to one of the nation’s highest government offices.

Secretary of State nominee Mike Pompeo has faced scrutiny over his position on some human rights issues, but Congress has paid minimal attention to the former CIA director’s threat to environmental efforts. Pompeo’s hardline views on climate change and his cozy relationship with corporate environmental abusers distinguishes him as a looming danger that could prove even more destructive than the former big oil executive whom he will replace.

Pompeo stands accused of playing a prominent role in influencing President Trump to withdraw from the Paris Climate Accord, one of many efforts at climate diplomacy that the Secretary of State nominee has advocated against. Pompeo also stands as an alleged avid spreader of lies about climate change and a staunch advocate for big oil interests. If confirmed, he will likely push for Arctic drilling: a measure that would further devastate an already vulnerable, key portion of the world.

With enough votes, Pompeo’s nomination could be blocked, potentially averting more catastrophic environmental policies. While some senators have already pledged to veto the current nomination, stronger guidance and leadership can secure the necessary ‘no’ votes needed. Sign this petition and compel Senate Minority Leader Chuck Schumer to take a stand for the environment and against a man who could unleash a fresh wave of environmental and subsequent human rights crises upon the world.

The United States has remained one of the world’s most prominent players in environmentalism, for good and ill. Anecdotal evidence tells us by the day what scientists have long warned: human-induced global trends in climate change pillage not only our environment, but also communities worldwide impacted by subsequent drought, mass migration, natural disasters, public health crises, and so much more.

Some of your colleagues have vowed to say no to a man who will likely propagate these dangerous trends: Mike Pompeo. Distressingly little attention has been given in the confirmation hearings to Pompeo’s questionable-at-best, deeply concerning record on environmental issues. From attacks on the Paris Climate Accord and other environmentally friendly initiatives to wholesale cheerleading for destructive drilling and similar actions that value corporate interests over global protection, Pompeo is poised to be one of environmental welfare’s strongest foes.

Please weigh the pros and the cons of confirming Pompeo and ask yourself if a ‘yes’ vote will be a long-lasting ‘no’ to the future of the world we all call home.