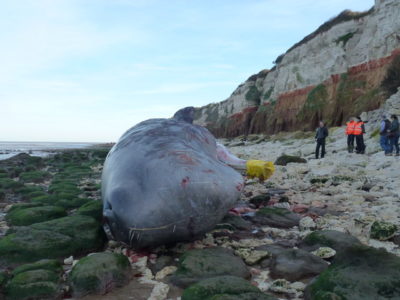 Goal: Reduce the amount of plastic waste that is entering the ocean and endangering whales and other marine species.

A sperm whale measuring over 30 feet and weighing over six tons was found dead on a Spanish beach. Local officials determining the whale’s cause of death discovered that the animal had swallowed over 60 pounds’ worth of plastic garbage, including disposable bags and nets used in the fishing industry. It is believed this caused the whale to develop a deadly infection, leading to his tragic demise.

Plastic poses many risks to whales and other forms of marine wildlife. While large pieces of plastic waste can cause lethal harm, as seen in the case of this sperm whale, even microscopic plastic particles are contributing to a slow death by poisoning for countless animals. Combined with overfishing and other forms of pollution threatening our seas, the addition of even more plastic waste could spell doom for many vulnerable species, including whales.

All countries have a responsibility to help clean up the ocean and stop contributing to the plastic waste epidemic. Sign this petition to urge the Spanish government to enact stronger laws and cut down on the amount of disposable garbage entering the sea.

Government officials in Murcia have determined that the official cause of death for a sperm whale discovered on a regional beach was an intestinal infection caused by the whale’s ingestion of nearly 30 kilograms worth of plastic waste. Among the recovered garbage were scores of disposable bags, as well as nets and ropes widely used in the fishing industry. Combined, this human-produced waste contributed to the young sperm whale’s untimely death, and it is poisoning countless more creatures worldwide.

You must take necessary measures to enact stronger laws and regulations on plastic waste, as well as to limit the amount of disposable garbage that is entering Spanish waterways. Spain could pave the way to a more environmentally friendly future by eliminating disposable plastic bags nationwide and requiring that fishermen use equipment that is less harmful to wildlife. Please do your part to help ensure that the oceans will remain a haven for many living creatures for generations to come.