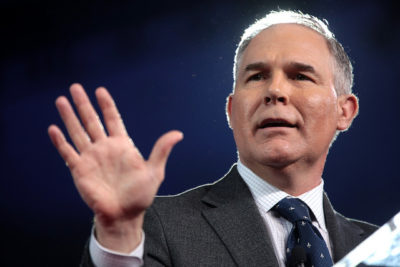 Seemingly every day, more details emerge about the egregious ethics violations committed by EPA head Scott Pruitt. With this continuous stream of allegations, more demands for Pruitt’s resignation or firing emerge as well. Recently, over 60 members of Congress sent a letter to President Trump calling for the embattled EPA chief’s resignation.

Most of the allegations swirl around gross financial abuse of organizational funds, including millions of dollars in extravagant travel expenses, office furniture worth more than the annual salary of the average American worker, use of emergency vehicles as ‘escorts’ to a  lavish restaurant, and a security detail that far eclipses security for the president himself.

Even more troubling , however, are the actions that have a direct impact on the future of a vital American agency. In line with the unprecedented number of lobbyists now circling the EPA, Pruitt rented a luxury room from a well-known lobbyist in the energy industry that falls under EPA regulation. When concerned EPA employees exposed these abuses, they were punished with demotion.

While other EPA employees categorize Pruitt’s tenure as a “low point,” President Trump continues a wholehearted defense of his foot soldier in unprecedented assaults on environmentalism. Sign this petition to hold the president to his campaign promise of “draining the swamp.”

This was one of your most consistent and passionate rally cries. With your continued defense of EPA Administrator Scott Pruitt, you have broken this pledge.

Will you stand in support of someone who views office furniture as more valuable than a year’s worth of work from the average American? Will you pat the back of an individual who believes he is entitled to travel, accommodations, and security rivaling that of the president? Will you pledge your allegiance to a ‘swamp creature’ who uses his influence and taxpayer dollars to advance his own interests, or will you pledge allegiance to the United States of America and the individuals who elected you to be ‘their’ champion?

The choice is clear. Back Pruitt, or back the people.