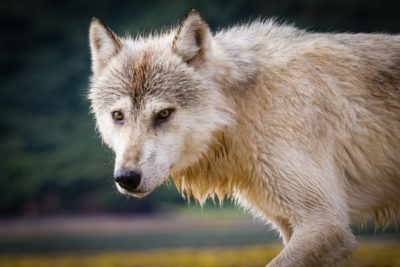 Wolves are being killed at near record-high numbers in the area around Denali National Park, prompting officials from Alaska’s Department of Fish and Game (DFG) to shorten its annual wolf hunting season. While the DFG claims that the wolf population is not at risk, wildlife experts have expressed concerns about the state’s lax hunting regulations and the fact that these predators are increasingly being gunned down in large numbers by hunters using assault rifles on highly mobile snow machines. They fear it may be only a matter of time before the iconic wolves of Denali are hunted to extinction.

While shortening the wolf hunting season will help prevent more senseless killings, it cannot reverse the damage already done. If the wolves were to go extinct, this would not only be disastrous for the ecosystem– it would likely hurt Alaska’s economy as well. Denali National Park is the state’s biggest tourism draw, with many people visiting simply to get a chance to see the wolves in their natural habitat.

We must protect Alaska’s wolves for the future. Sign this petition to demand a no-kill buffer zone around Denali National Park and a statewide ban on using assault rifles to target major predator species, including wolves.

Denali National Park is your state’s largest source of tourism revenue, drawing thousands of wildlife-lovers annually. Many of these visitors come simply to see wolves in their natural habitat, a sight that has vanished in so many other parts of the world. Yet thanks to lax regulations on predator control in Alaska, the wolves may soon disappear from Denali as well.

Large predatory species, such as wolves, play a pivotal role in ecosystems by managing herbivore populations. When they are killed at unsustainable rates, as is happening in the area around Denali and statewide, the entire ecology of the region is negatively impacted. That is why we are urging you to establish a no-kill area around Denali National Park, and to change hunting regulations to prohibit the use of high-powered assault rifles against large predators, including wolves.