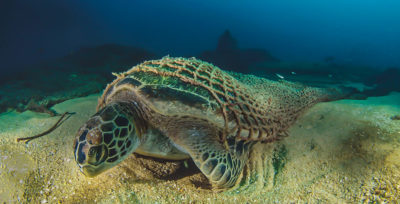 Fishing equipment lost or discarded in the ocean, also known as ghost gear, is killing over 100,000 marine animals every year. The abandoned refuse pollutes waters, and it’s an accumulating threat to the delicate balance of the oceanic environment. Animals that become entangled in ghost gear suffer physical injury and drown, while other unfortunate creatures remain entrapped to die of starvation.

Fish, turtles, sharks, dolphins, whales, seals, birds and more get ensnared in ghost gear, unable to free themselves. Frighteningly, the entire wildlife food chain is affected because when one animal is caught up in the debris, its predators attempt to consume it and also become relentlessly trapped. Just one ghost fishing net, line, or trap can kill an enormous number of oceanic dwellers.

Tons of ghost gear ends up at the bottom of the ocean, continuously killing animals for no reason. In addition to destroying marine life, it also harms the underwater habitats of sediment-dwelling organisms and coral reefs. Making matters worse, ghost gear is composed of highly resilient and durable material that is estimated to take up to 600 years to deteriorate.

Every effort must be made to correct this problem before it is irreversible. Our government has a responsibility to protect the environment, and the problem will only worsen if effective steps are not taken to address the threat of marine garbage. Sign the petition to demand that ocean clean-up research be conducted and intensive action taken to save the ocean and its inhabitants.

Every year, lost or abandoned fishing nets, lines, and traps claim the lives of countless sea animals that become ensnared and unable to escape. This refuse problem, classified as ghost gear, has become increasingly threatening with the expansion of globalized fishing operations. Furthermore, the discarded fishing gear was designed and manufactured for durability and could take up to 600 years to break down.

The research and efforts that have been made to abate this problem are simply not enough. The issue of overall marine debris must be addressed in order to halt and reverse the obvious damages to oceanic ecosystems. This mounting environmental issue also directly harms human beings by creating pollution and diminishing food sources.

The ghost gear resting at the bottom of the ocean is deadly to countless aquatic animals, and it subjects living creatures to physical harm and a lingering death for absolutely no reason. It wreaks havoc on the entire wildlife food chain as predators also become imprisoned to await an agonizing death. I demand that extensive efforts be made to research the escalating problem of ghost gear in our oceans, and I insist that appropriate and intensive action be taken to protect the ocean for current and future generations.