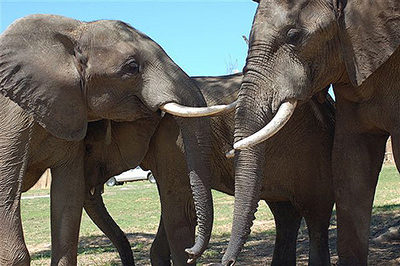 Goal: Praise United Kingdom for finally introducing a ban on the ivory trade.

The United Kingdom will be banning all ivory sales, thanks to public pressure and persistent efforts from conservationists. The ban will reportedly be “the toughest in Europe and one of the strictest in the world,” cracking down on the sale of products containing ivory made in the last 30 years and containing more than 10 percent ivory; there is nothing to be done about vintage products with trace amounts, but the ban assures that no new products will be made or sold.

This ban has been a long time coming. For five years, the UK was the largest exporter of legal ivory in the world, with thousands of elephants per year being killed to produce it. Public pressure and petitions such as this one on ForceChange have challenged this grim reality, fighting for the rights and welfare of the elephants targeted by poachers and ivory dealers for their tusks, and these efforts have finally paid off.

The news of this ban is most welcome after years of the UK stubbornly clinging to their ivory trade. Every country that stops the sale and exportation of ivory is a step towards the phasing out of ivory products overall, meaning a brighter future for the elephant population. Sign this petition to thank the UK government for finally stopping their irovy trade.

The United Kingdom’s recent announcement of a ban on ivory sales is most welcome. For years, the UK has been one of the chief ivory exporters in the world, causing the deaths of thousands of African elephants each year, and the most reluctant to change this despite mounting public pressure. At last, though, the efforts of environmentalists and animal conservationists have paid off.

Ivory is fast on its way to becoming as obsolete as fur coats, as objects traditionally made of ivory are now crafted with other materials, and the more countries that reflect this, the better. This ban is a major step towards a brighter future for the elephant populations and is much appreciated. Thank you for listening to the demands of the public and putting the welfare and survival of elephants above the sale of an obsolete material.