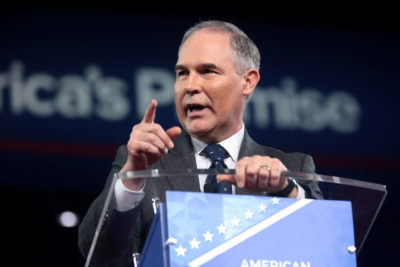 The EPA is planning an overhaul of their clean car standards. The clean car standards this country has used for the past decade have been enormously successful, reducing nearly 250 million tons of climate emissions and saving almost $50 billion in gas expenses. Pruitt’s administration plans on rolling back these standards in a move that benefits automakers and oil tycoons.

Vehicle emissions are one of the top pollutants of the environment, and the EPA had been successful at starting to heal some of the previous damage. The move is another in a series of attacks on the environment by Pruitt’s EPA. Sign the petition below to demand he restore the clean car standards immediately!

The actions you take in office lead the American people to believe that you want the Earth to suffer at your hand. Never before has an administrator shown such a complete lack of respect for the field they administrate. Rolling back the clean car standards is almost as harmful as dumping toxic waste directly into our streams.

The American public has not trusted the actions of this administration from the second you took office; now is your chance to restore some of that public trust. Take the necessary action to ensure that our environment doesn’t suffer any more under your watch.