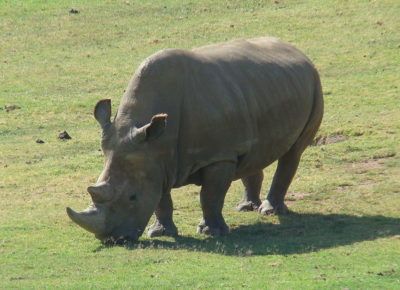 Goal: Support scientific endeavors to bring the northern white rhino back from near-extinction.

Scientists have discovered a way to preserve the northern white rhino as a subspecies even after the last remaining male died from health complications. This method is in-vitro fertilization coupled with stem cell science; frozen sperm from deceased male rhinos plus the eggs of the two last aging females would be implanted into the womb of female southern white rhinos.

However, this method is both controversial and still a fledgling idea. Currently, eggs and sperm alike have been frozen until scientists can figure out a foolproof way to implant them. But more than that, the idea has proven controversial, as conservationists believe the money required to fund this revival should be used to protect other species. While technically true, the northern white rhino’s near-extinct status should render it a priority at the moment, thus the need to back this endeavor.

A species hunted to near-extinction so rarely has the chance to be revived, and the northern white rhino deserves that chance. Sign this petition to support funding for the IVF and stem cell methods in saving this species.

The northern white rhino is on the brink of extinction after the last remaining male died of illness, but scientists have discovered a way to preserve the population via IVF. The eggs of the two remaining females plus sperm frozen from other deceased males would be implanted into the uterus of female southern white rhinos.

Unfortunately, in addition to the practice of rhino IVF still being in the fledgling stages, the plan has generated some controversy due to conservationists feeling other species are more deserving of the funding that would go into this plan. While it is good to protect as many endangered species as possible, the northern white rhino is in dire need of resuscitation. The only two remaining are elderly, and their time on this planet is limited.

You must support this endeavor wholeheartedly. The northern white rino deserves this chance at a revival, and is worth the funds necessary to make it possible. Support the scientists as they work to save this subspecies from completely disappearing.