Eugene, Oregon has a history of being proactive. Its residents seek to create a sustainable community and are well on their way to accomplishing this. This proactive spirit has inspired innovation in the Lane County Transit District with the emergence of the EmX bus rapid transit system (BRT). The EmX is a well-implemented addition to an already extensive bus system. In a large town with considerable sprawl, yet lacking the infrastructure for an electric rail system, the EmX is an appropriate fast-track transportation option along Eugene’s more heavily traveled avenue

EmX is an abbreviation for Emerald Express (it’s pronounced M-X). The name was figured from the efficient express-like qualities of the BRT. The Lane Transit District website informs us the EmX began service in 2007 and had 1.5 million boarding’s in its first year; doubling the rider-ship of the standard buses that had originally run that route. The strong majority of the $24 million project was federally funded, a large incentive for the municipal government to proceed. The first EmX corridor runs from Eugene Station and along Franklin Boulevard, a busy street that perimeters the University of Oregon campus (this is a two-way route). EmX buses complete the nearly four-mile corridor trip in roughly 15 minutes according to the schedule. After two years of construction on a second corridor that is considerably longer than the first, a second route was added. It loops along the area’s largest hospital and also stops at the distant Gateway mall. 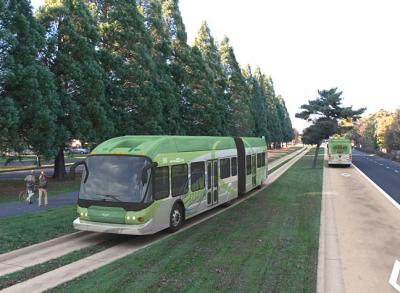 The EmX fleet consists of six hybrid electric-engine buses that are 60 feet in length. Because of its length the bus must be articulated; this means the middle of the bus is flexible. Each vehicle costs $960,000. EmX buses use a GM Allison Hybrid Engine; an engine that uses electric propulsion up to a certain energy output and then diesel fuel injection. According to Hybrid-Vehicles, kinetic energy produced by the diesel engine actually recharges its electric counterpart. This energy is also recaptured by kinetic energy produced by braking; in which 25% of the energy lost in the deceleration process is re-captured. When the bus is idle there are no emissions because the diesel fuel is not being used. When the bus accelerates there is little emission because it uses recaptured kinetic energy to propel the bus forward. The hybrid bus gets 2.9 mpg, a lesser fuel efficiency than a normal diesel engine, which gets about 4mpg. A lack of fuel efficiency is of course compensated for by a lesser use of fuel.

The EmX is timely and quick from stop to stop. It has an exclusive lane (corridor) with signal priority through intersections for most of its route. The hope is that the only time the bus stops will be to pick up and unload passengers. There is an off-bus fare system to quicken the process of boarding. Each stop has a fare box where passengers purchase their boarding pass to have it ready when their bus arrives.

EmX buses are very bike and handicap accessible; they have low floors (level boarding), wide entries/exits on either side of the bus, as well as a bike storage area. Reader boards and audio announcements signal the arrival of stops to avoid confusion. Having visual and auditory indication is also meant to prevent neglect of visually or hearing impaired people.  The bus has an extensive carrying capacity, between standing room and seating it can transport well over 100 people (Lane Transit District).

The city of Eugene is growing. Much of this growth is pushing the city boundaries, making vehicle travel more necessary. Lane County development has long followed segregated land use patterns in which neighborhoods are secluded from the commercial sectors and the commercial sectors themselves tend to be stretched geographically. The Center for Neighborhood Technology research group who is directly involved in the creation of the Travel Matters website, indicated Eugene and surrounding areas as having an above average annual output of carbon dioxide emissions. The spaced orientation of development in Lane County results in high VMT’s (vehicle miles traveled). Increased VMT’s directly result in more emissions and more traffic congestion. Traffic congestion in itself causes accumulation of greenhouse gases. Vehicles are either idle or moving slowly, unnecessary emissions that don’t even come with the trade-off of moving from point A to point B.

For a high population area with such sprawl it is important to have a good transit system. It offers opportunity to a low-income demographic that can’t afford a vehicle. Just as important, it spares the atmosphere thousands of pounds in greenhouse gas emissions. By my calculations, if even half of the EmX passengers taking the Franklin route on a given weekday were driving instead, it would produce 5, 240 more lbs. of carbon dioxide emissions.

Lane Transit District has high hopes for the future of the EmX and other innovative possibilities. Transit planners’ greatest ambitions are to build another corridor to expand to the Westside of town. The Westside of Eugene is an industrial section of town that sees perhaps more VMT’s than anywhere else in the county. An EmX corridor would offer a great convenience to drivers and non-drivers. It is estimated that rider-ship would near capacity during the weekdays. Unfortunately the project has been met with a lot of resistance. Local funding is a reflection of tough economic times and some of the public don’t see the value in the investment of another corridor.