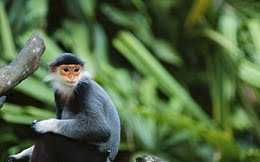 Animals that appear on the endangered list are highly threatened to disappear from surviving in the world. Unfortunate human activities have posed as first hand problems, including continuous deforestation and hunting. Like many other animals, monkeys located around the world have been directly affected by ongoing shifts in their natural environment. Exotic species found across Africa, Asia, and South America have been under constant strain for survival. Unfortunately some populations are declining rapidly towards extinction.

There are over 200 different species of monkeys in the wild. Monkeys can be found in all areas of the world. The Tana River Red Colobus is among one of the most endangered species. It can only be found in Kenya, along the Tana River banks. The natural habitat of the Tana River Red Colobus monkey has been greatly impacted by humans who have farmed and used the land for themselves. The 60 kilometer stretch for the monkeys’ habitat has significantly changed. The result of human progress has left only less than 1,000 of these monkeys in the wild.

Not far from Indonesia, in neighboring Vietnam, another species of monkey has fallen victim to becoming endangered. The Tonkin snub-nosed monkey has less than 150 left in the wild population. They have been seen in four areas across Vietnam. These monkeys, along with the previous monkeys in Kenya and Indonesia have lost their homes because of deforestation. The Tonkin snub-nosed monkeys have also been extensively hunted, decreasing their overall population. Also in Vietnam, the Golden-headed Langur was a popular monkey on Cat Ba Island. They have been hunted for medicinal purposes, significantly reducing the size of their population. The Golden-headed Langur has had very hard times maintaing a steady population because there are much less males than females. This results in only a few babies being born every year.

The brown-headed spider monkey is an endangered species that lives mainly in Ecuador and Colombia. They can only be seen in two areas in Ecuador. Like many other monkeys around the world, the brown-headed spider monkey has become near extinction because of deforestation and hunting. The monkeys don’t have their natural treetops to live in, and have suffered the consequences of human actions.

Although many species are under threat of becoming extinct, there have been cases of monkeys who have survived. The Andean titi monkey was once low in numbers but has increased in population due to conservation efforts. A protected 23.5 hectare area of the San Martin region of Peru has given these monkeys enough space to create homes without being subjected to human activities. The restoration of the area has helped the monkeys stay away from becoming extinct.

The grey-shanked duoc monkey has also been able to survive in the jungles of Vietnam. They were once considered to be one of the most endangered monkeys with only less than 1,000 left. Scientists were able to find a colony of 100 more of these monkeys in the wild, increasing their total population. Illegal hunting and deforestation cause the grey-shanked monkey to land on the endangered list, but new hope has emerged for their survival after this discovery.

Monkeys and other endangered animals may be losing their habitats, but organizations around the world continue to try to protect them as much as possible. The World Wildlife Fund has been a leader in nature and animal protection for over 45 years. Working in over 100 countries, it is supported by over 5 million people internationally. Anyone can volunteer their time or donate money to the World Wildlife Fund. All proceeds and efforts go towards preserving nature and wildlife. Scientists and researchers continue to get a deeper knowledge of endangered species, and how to help them survive.