October 15, 2010 (GreenAnswers) – As European explorers made preliminary excursions through Brazilian waterways in the late 1800s, they noticed something puzzling about the surrounding land. Brazil’s characteristically uniform red soil beds, too dense and claylike for most manipulable agriculture, was punctuated with beds of dark, fertile soil. What could possibly account for this unprecedented irregularity?

Scientists among the European exploration teams hastened to come up with explanations for Brazil’s unorthodox soil patterns, which they named terra preta. Some hypothesized that the fertile black soil was the widespread remnant of a massive dead lake. Others postulated that it was due to pockets of volcanic ash, absorbed into the soil after centuries of occasional volcanic activity. Unable to hold up to the scrutiny of modern science, these explanations eventually faded into historical obscurity, and the issue of Brazilian soil irregularity was put on the backburner of the scientific community. Until now. Resident soil scientist at Cornell University, Johannes Lehmann, recently took up the mystery of terra preta, and has come up with an answer that he thinks not only answers the question of the black soil’s origins, but also gives us a valuable tool for reversing climate change.

While studying in Brazil in 2003, Lehmann worked with teams of resident anthropologists and came to the conclusion that terra preta could not be explained by natural phenomenon. Instead, Lehmann concluded that ancient Amazonian farming civilizations must have turned miles of red clay soil into fertile black soil by systematically burying ultra-rich carbon deposits in the earth. His claim supported by archaeological and chemical evidence, Lehmann set out to prove his theories further through a series of farming studies in the neighboring South American country of Colombia. 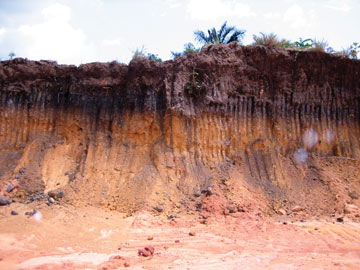 An example of a terra preta field in Brazil

Lehmann’s first order of business was to produce the concentrated carbon necessary to test this ancient technology. He wanted to do this by using a contemporary chemical process he’d been testing as a way to solve a very modern scientific query: how can we dispose of organic matter without releasing heat-trapping greenhouse gases into the atmosphere? Normally, when organic matter breaks down, it enters into a carbon cycle, releasing carbon emissions as it decomposes. These emissions then become pollutants, locking heat into our atmosphere, providing the impetus for global climate change. Lehmann sought to short-circut the carbon cycle by using a technique called pyrolysis, a way of heating organic matter without using oxygen. The process results not in gaseous byproducts but instead in solid carbon that gets trapped inside black chunks of charcoal-like material.

A handful of biochar ready to be deposited into farm soil

This carbon byproduct, known as biochar, was used in Lehmann’s Colombian farming experiments and produced fantastic results. The study proved that soil enriched with biochar produced up to 140% more agricultural product (in this case, corn) than ordinary gardening soil. This is because biochar, once introduced to the host soil, acts like a huge carbon sponge, holding in both moisture and nutrients to boost overall crop yields. Not only that, but the solid carbon deposits seem to be a highly stable additive; calculations taken from samples in the ancient Brazilian black soil show that carbon deposits have remained active in that soil for centuries, and possibly for as long as eight thousand years.

For Lehmann, biochar represents a scientific breakthrough that could very well be the key towards producing climate change. Biochar production could reduce carbon emissions by turning organic matter into a usable alternative product. Not only that, but biochar could be used to stimulate forest replenishment, accelerating the growth of carbon-absorbing trees while producing zero carbon itself. This has the potential to radically decrease overall carbon levels; Lehmann’s initial calculations show that producing biochar from just 120 million hectares of US farmland could shrink the nation’s annual carbon emissions by ten percent. Biochar technology can also be used on a smaller scale in the developing world. As a cheap and efficient stove fuel, widespread biofuel distribution in Africa and Central Asia could both slow rural deforestation and reduce the rates of sickness and death caused by the toxic fumes released by traditional charcoal cook stoves.

All of these options are certainly plausible now that both the public sector (through the US Department of Agriculture) and the private sector (through a wide-range of bioenergy companies hoping to become carbon-negative facilities) have begun investing in biochar research and development, an important step towards reviving this ancient technology to solve the problems of the modern age.